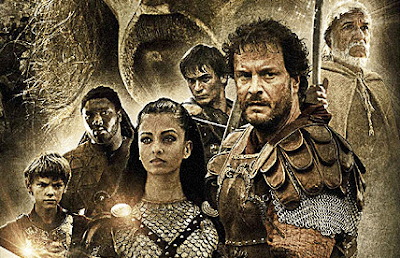 It seems appropriate, the day after Colin Firth won a well-deserved Oscar for his brilliant performance in The King's Speech, to post a review of, shall we say, one of his lesser-known films. I know of the existence of this movie thanks to Antoninus Pius' blog, where he posted a review a while ago - the film disappeared so entirely on its cinematic release I'd never have heard of it otherwise. It is a gloriously silly concoction in which Academy Award Winner Colin Firth and Knight of the Realm, Academy Award Winner Sir Ben Kingsley travel to Hadrian's Wall with Mr Wickham to protect the kid from Love, Actually (who doesn't appear to have aged in four years) from Boring himself, Lucius Vorenus. Who is a Scots-accented Goth.

If you weren't confused enough already, Batiatus also makes an appearance, not as Batiatus (one of Firth's men) but as a slimy senator who conspires with Star Trek DS9's Dr Bashir against our heroes and is, once again, gutted for his pains. True to his later argument, regarding Spartacus: Blood and Sand, that since everyone would be speaking Latin, it doesn't matter if he uses his own Scottish accent, his character here has quite possibly arrived in Rome via Edinburgh. Trouble is, all the other Roman characters are speaking The Queen's Latin, while all the Goths use Scottish accents, so this is just off-putting (or, possibly, an explanation for why his character switches sides?).

If I poke holes in all the fim's historical inaccuracies we'll be here all day, but I feel I should draw attention to some of the biggest clangers. First of all, neither Tiberius nor Romulus Augustulus were the last of Caesar's line, as Caesar's line died with his son by Cleopatra, Caesarion. (Of course, there's always the possibility that Dodgey from Rome smuggled Caesarion away and Romulus is his descendent - but in that story, Caesarion isn't Caesar's son anyway...). Caesar left no direct descendants at all and the last emperor to be related to him was Nero - Tiberius was his nephew's step-son. Perhaps more importantly, attempts to create a hereditary monarchy in the Roman Empire were generally doomed to failure sooner or later so the emphasis on bloodline is a bit off. As for the Eastern Byzantine Empire - OK, it was becoming an increasingly separate entity from the Western Empire, but the fashions are far too Oriental and not Greek enough and I'm pretty sure it didn't extend as far as Kerala in southern India.

The film also brings up the 'lost' ninth legion, who may or may not have disappeared somewhere in Britain or Europe several centuries earlier. Antoninus Pius knows much more about the military history of this than I do (being emperor and all) so I point you in the direction of his blog for the details, but it's worth bringing up because the disappearance of the ninth is the subject of both last year's Centurion and next month's The Eagle. I also really like this film's answer to the question of what happened to the legion - they settled down, married local women, took Celtic names and stayed put. This may not be what happened to the real ninth legion, but it is something that happened a lot after the Romans withdrew from Britain around AD 410 and it makes a nice change from the usual Pictish massacre.

Really, though, it isn't fair to pick at the history in this film, because this film isn't supposed to be about history. This, like Troy, is about myth and reality really has no part in it. The writers (and Valerio Massimo Manfredi, author of the novel on which the film is based) haven't started with Roman history, but with Arthurian legend. Stories of King Arthur often claim an origin from the classical world for their hero (just like Virgil and others claiming a Trojan origin for the Romans, in a way), though the precise nature of the connection varies. In producing this story, the writers have started with Arthurian legend - Merlin, the sword in the stone, the name 'Excaliber', dragons, Vortigern - and traced their origins back into an imaginary Rome.

The film actually walks a fine line between fantasy and realism reasonably well, but balancing itself so carefully in between two distinct genres unfortunately means it doesn't seem to know where it lives, and doesn't fit into either of them. The film starts out like an historical swashbuckler, but about halfway through it seems to want to be The Lord of the Rings, which it most certainly isn't - there isn't nearly enough of a sense of scale and wonder about it, and the usually excellent Patrick Doyle doesn't quite seem to be feeling it with the music.

The actors do their best with two-dimensional characters, the central group being made up of an absolutely typical Five Man Band (as described on TV Tropes); The Leader (Academy Award Winner Colin Firth/Mr Darcy), The Lancer (possibly Vatrenus, killed off fairly early on), The Young Guy (Mr Wickham/Prince Albert), The Big Guy (this film's Batiatus) and The Chick (Mira). The actress playing Romulus' mother is rear-end-clenchingly awful, but everyone else is fine, and Firth and Kingsley could read the phone book and be entertaining, though neither are quite up to their Oscar-winning heights here. Kingsley's Welsh accent is fine but his performance in general is all too reminiscent of the narration at the fabulous North Wales tourist attraction, King Arthur's Labyrinth (this involves a boat in a cave and is brilliant - if you're in southern 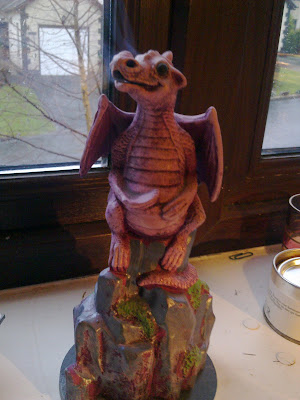 Snowdonia, go visit it!). Firth can do the snappy soldier pretty well and has some great comedy moments (his face when Sangster hugs him is hilarious) but he struggles, ironically, with the Independence Day-style speech he has to give which is not quite as successful as his more recent speechifying efforts (though stammer-free).

A smoking-dragon incense burner I bought from Corris Craft Centre, by King Arthur's Labyrinth
I think this could end up being a good guilty pleasure for rainy afternoons. Aishwarya Rai as Mira kicks ass, Firth and Rupert Friend are reliably sexy and wield swords, Boring gets his comeuppance and it's got Merlin in it, not to mention some really amazing-looking scenery filmed in Tunisia (though the CGI-castle thing in Britannia not only makes one think of Monty Python, but is so incredibly inappropriate for the period it takes me right out of the film). It also features Alexander Siddig, who I met at a convention once and who is lovely, so that's always nice (though he is once again playing a eeevil character - he explained to all of us that, outside of Star Trek, he has spent most of his career stuck playing eeevil terrorists). This is not, by any stretch of the imagination, a good film, but its problems are artistic more than they are historical, because this film is not meant to be any more historical than Xena: Warrior Princess. Watch it with friends, pizza and your alcoholic/caffeinated beverage of choice and you may find you have an enjoyable evening. Just don't expect it to be Gladiator.
Arthurian legend Films Ninth Legion Roman history