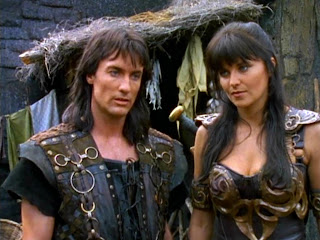 'So he's the one that made you so... aggressive?' Understatement of the week goes to Gabrielle. After a steady diet of Spartacus: Blood and Sand and True Blood, both of which feature blood-drenched revenge stories in which normally Stoic characters snap in postumous defence of dead loved ones, it's quite strange watching the more family-friendly Xena version. Xena's on an arc of redemption, and unlike Spartacus, Eric Northman or her own alter ego Lucretia, she must fight the case for bringing the bad guy to formal justice (even though she later knocks out a bunch of guards just because she can't be bothered talking her way in to court). Her brother Toris, to her chagrin, is after the more traditional sort of revenge.

This episode is set firmly in Medieval Fantasyland. Bad guy King Cortese's crown looks sort of Viking-Anglo-Saxon-y, only slightly more geometric (it kind looks like something from Stargate) while his robes are brightly-coloured pseudo-Oriental style. His guards do look a bit more ancient.

There's nothing overtly Classical in this episode, but of course, revenge stories go back pretty far in human history. In Greek myth, vengeance was an obligation in certain cases - the most famous stories explore the ramifications if that obligation conflicts with another, equal one. So for example, Orestes is pursued by the Erinyes (Furies) because he was obliged to avenge the murder of his father, but this required him to commit an equally horrific crime, and murder his own mother. In the end, Athenian justice unsurprsingly comes down on the side of the father, but still, it was a dilemma.

Xena's story does share some qualities with Orestes'; like Orestes, Xena's brother unexpectedly discovers his long-lost sister while hunting his family's murderer and needs her help to succeed. Xena herself is, of course, much more physically proactive than Orestes' sister Electra, a character who first appears in Aeschylus' play Libation Bearers in a fairly passive, information-delivering role, takes a bigger role in Sophocles' Electra and actually jumps in and gets her hands dirty in Euripides' Electra. Xena is closest to Euripides' Electra, who holds the sword as Orestes kills Clytemnestra, but Euripides' Electra is actually more bloodthirsty than the redemption-seeking Xena. All the same, there's a definite Orestes-and-Electra vibe to the two siblings working together, and in Gabrielle, they've even got a third wheel wandering around in the background, as with Orestes' friend Pylades.

Gabrielle spends much of the episode hanging out with Cute Village girl, leading to amusing scenes like this.
The episode is somewhat marred by Cortese's mad over-acting and Xena's weird springing jumping move partway in but on the upside it does have lines like:
King Cortese: 'I want them for execution by the morning!'
Guard: 'What time?'
I also like the climax, in which Xena offers Toris the death of Cortese, but tells him that it won't make him happy, and he will cross a line he can't go back over (though this would be more effective if the same character hadn't been working as an assassin at the beginning of the episode). For someone whose village was wiped out, Xena has a surprisingly large number of living relatives, but it's always nice to see them every now and again. I hope future episodes will explore Gabrielle the Trainee Warrior's relationships with her family as well, since she's changed so much since they last saw her.