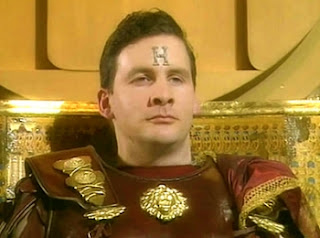 In this classic episode of Red Dwarf from series 6, Rimmer goes through one of those time-dilation wormhole thingies that seem to be surprisingly common in outer space.

RIMMER: Isn't there some kind of a time dilation problem when you go through a wormhole?
KRYTEN: Well, yes there is. Since you're travelling through a compressed space, time will move more swiftly for the object passing though the wormhole. One minute on this side of the wormhole will represent many years on the other.
RIMMER: So, is that good?
KRYTEN: Balls on standby sir.
RIMMER: More than a year and a half?
KRYTEN: Er, yes sir, a little more.
RIMMER: How much more?
KRYTEN: Well, let's not beat around the bush, a lot more.
RIMMER: Kryten, that's still beating around the bush. Just tell me.
KRYTEN: Well, remember that medieval war sir, that lasted quite a long time.
RIMMER: The Thirty Years War?
KRYTEN: No, not that war sir, the other one.
RIMMER: The Hundred Years War?
KRYTEN: Now take that figure, and multiply it by six, and then you'll come up with your golden number sir.
RIMMER: Six hundred years!
CAT: Pinch me!

So Rimmer has to wait six hundred years for the others to come get him, during which time, using a machine that makes minimal sense even by Red Dwarf's standards given that he's a hologram, he creates an entire society based on his DNA (the aim was to create a woman, but it didn't quite work). So Rimmer spends six hundred years trapped on a planet inhabited by clones of himself. 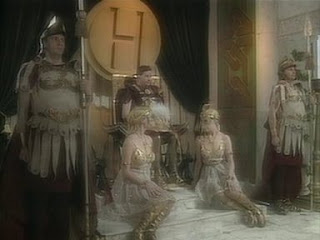 The reason I'm blogging this is, the society that establishes itself on the planet of Rimmers models its costumes, at least, on ancient Rome. The male Rimmers wear Greco-Roman-ish armour (it looks Roman to me) while the females wear fairly typical generic sexy outfits with vaguely Roman-looking shoes (and with veils to hide their faces, which are identical to the males').

Something vaguely Greco-Roman looking was probably considered most appropriate for a society born from a man who believes himself to be the reincarnation of Alexander the Great's chief eunuch. Rimmer is obsessed with the military and with empire, so really, it had to be either the Romans or Napoleonic costumes, and the Romans look a bit more exotic (and require less expensive weapons).

I also have a suspicion that the fact that this particular society is also built, techinically speaking, on incest - as Rimmer draws attention to in a voiceover as he 'grows' the first clone - may have partially inspired the costume choice. The poor Romans were not any more open to incest than our own culture, but thanks to one mad emperor and one old one who married his niece, they've gained a reputation for partaking in incest second only to their reputation for orgies. So now, popular culture gives us emperors who, in real life, were much less inclinced to breaking sexual taboos having it away with their sisters, and a fantasy novel with a plot that revolves, to a great degree, around the consequences of an incestuous relationship reminds reviewers of the Caesars. (Egyptian pharoahs really did marry close relatives to each other, but only among the royal family). With this in mind, it's unsurprising that the costume designers turned to ancient Rome for the Rimmerworld costumes, though I doubt the Romans themselves would find the portrait very flattering!
British sitcoms Comedy Romans Sci-Fi and Fantasy TV