The Simpsons: Tales from the Public Domain 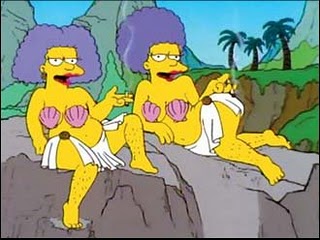 Waaaaaay back in 1990, in their third ever full length episode, The Simpsons did an episode called 'Homer's Odyssey', which had nothing to do with Classics beyond the title, but was the episode in which Homer became safety officer at the nuclear power plant. It wasn't until season 13 that the show turned its attention to Homer's actual Odyssey, in 'Tales from the Public Domain'. The Odyssey is the first of three 'Classics for Children' Homer reads to Bart and Lisa (the other two are Hamlet and something about Joan of Arc). The Odyssey section is really funny - like all the best spoofs, it sticks reasonably closely to the source material while adding the usual out-of-time jokes (mailboxes, pop music).

Of course, the biggest problem with doing the Odyssey with Homer as the lead is that Odysseus is meant to be clever. Homer, therefore, is much cleverer and, indeed, braver than usual in this incarnation. It works though, and the episode contains what is possibly my favourite explanation so far for the whole horse business (Flanders!Priam collects giant wooden animals, but doesn't have a horse).

There were a couple of elements of the story here that don't get an airing as often as others - the Sirens, for example, are physically unattractive; only the song is appealing. I may never recover from that image of Patty and Selma trying to seduce people! (They're still after sex, not shipwrecks). We also see Circe turning Lenny, Karl and Moe into pigs - and, inevitably, Homer eats them. Lenny cries that he wants his eyes gouged out at one point as well, which may be a reference to Oedipus. Indeed, when Homer gets to Hamlet and tells Bart it starts with the murder of Hamlet's father, Bart asks if he gets to marry his mother, in reference to Freud's argument that Hamlet, along with Oedipus Rex, is an example of the Oedipus complex in literary form. I think Marge should worry about how enthusiastic Bart was about that. (Karl and Lenny as Rosencrantz and Guildenstern is perfect, by the way).

This being a Trojan war story, of course, we have the obligatory jokes about just how long the war lasted. Homer!Odysseus' physical changes are predictable, but Helen of Troy now looking like Skinner's mother is pretty funny, and I liked the overflowing mailbox gag at Troy at the beginning. We also get the usual representation of Hades as the Christian hell, with added River Styx and dancing skeletons that may or may not be an homage to Harryhausen's skeletons in Jason and the Argonauts.

Flanders!Priam: Now throughout history when people get wood, they'll think of Trojans!

Hoemr!Odysseus: Sacrificing animals is barbaric! Now have the slaves kill the wounded.

Barney!Dionysus: You used to be fun! Where's the Zeus that used to turn into a cow and pick up chicks?
Mayor Quimby!Zeus: He grew up! 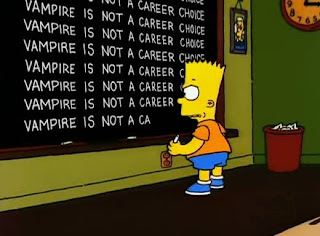 Also, from the unrelated but funny Blackboard gag: Vampire is not a career choice.

All in all, I thought this was a particularly successful Simpsons literary adaptation - though perhaps nothing will  ever quite beat the combination of James Earl Jones reading 'Nevermore' with Bart chirping up 'Eat my shorts!'
Ancient literature Comedy Mythology TV