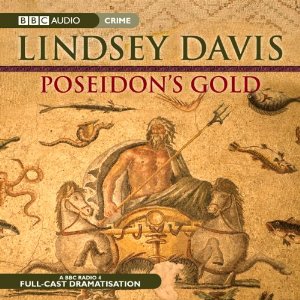 As ever, spoilers follow, mostly regarding the personal side of the story rather than the case itself!

Poseidon's Gold is another of Falco's more personal cases, and another fairly early one. We get to meet Falco's father, who's an interesting character, and a fun one to read about. Falco's relationship with him is tense, strained, yet ultimately he still cares at least a little - all of which makes it feel very real and makes it very interesting to read!

We also see a little bit of tension in Falco and Helena's relationship, which is refreshing too. I've no desire to see them break up or anything, but the odd difference of opinion is what makes their relationship realistic. I can't remember anything about the book version of this story - though I think I read it - but as I listened I thought Falco's repetition of his defense that the incident with his brother's girlfriend happened before he met Helena was a bit weak. I think if I was Helena, I would be crosser about the fact my other half had a possible daughter he'd told me firmly was his niece, rather than about something he did before he met me. I think maybe the emphasis in their argument got a bit lop-sided in the radio adaptation - the issue is certainly brought up, but the argument is a bit short, so hops about a bit.

This play is, however, slightly longer than The Silver Pigs, which is good. We get a reasonable amount of time for both the personal side of things and the actual case here, which is important, because they're not as closely connected as at first they seem. Festus is, as we know from the beginning, the key to everything, but the problem that led to Falco being chief suspect turns out to be largely separate from the motive for the actual murder. What's nice about this is that it keeps things pleasantly unpredictable, though you miss that wonderfully satisfying feeling you get from a complicated story that turns out to be intricately connected at the end.

The most interesting thing about this story for an historian is that it touches on that most frustrating theme, lost works. Robert Graves played with this a lot in I, Claudius - teasing readers by having his characters refer to works like Pollio's history, which are now lost and which we're all desperate to get our hands on. Davis' use of that idea here is really interesting, because of course, her characters have lost a Phidias too (a sculpture by a famous Greek artist - his statue of Zeus at Olympia was one of the Seven Wonders of the Ancient World). The difference between us and them is that they may still be able to get hold of other Phidias sculptures, and we only have Roman copies, but we share their frustration and disappointment at the loss of such a valuable piece of art. The story also highlights the dangers and difficulties of sea trade of course, which applies to most of history, not just the Classical world.

All in all, another fun story, and the radio adaptation is excellent as ever (Helena is played by a new actress, but equally good!). There's something about Falco that really does work well on the radio - perhaps it's the world weary sarcasm that Anton Lesser gets across so beautifully!
Books Detectives Falco Radio Roman history