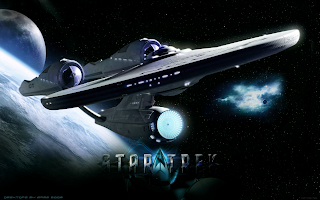 As you know, I love all things Trek, so of course I love this movie. I could live without the random, Star Wars-esque giant ice planet monster. And I have an ongoing argument over whether the alternate timeline presented here replaces the original, or runs parallel to it. But otherwise, it's perfect.

The plot revolves around the destruction of the planet Romulus, and the bad guys are a group of Romulans. When Romulans were first introduced, way back in the original series, their military set-up bore some superficial resemblances to ancient Rome, and their Romanness was part of a wider use of the Roman Empire as a parallel for both Nazi Germany and Communist Russia (sometimes both at the same time). In later appearances, individual writers or directors could choose whether or not to play up the 'Roman' elements of their culture, depending on what they wanted to do with their story.

The Romulans seen in the new film have, like the originals, a relationship to Vulcans, with pointy ears and a similar language. However, whereas in their first appearance this similarity was part of the point, here the visual similarity is played down, as the particular group of Romulans we're dealing with are tattooed and clothed very differently from Vulcans (and they're quite emotional too!). Their 'Romanness', likewise, is not really emphasised in their culture, costumes, hierarchy or ship, except in one respect - the name of their leader, Nero.

The new film is not especially interested in drawing a parallel between the entire Romulan race and ancient Rome, but it is interested in likening its main villain to one specific Roman, the emperor Nero. This Nero is far from an emperor, being the captain of a mining ship, a tough guy and a survivor rather than a pampered young ruler. He does share some traits with the emperor, mainly in his cruelty and vicious punishment of anyone who crosses him.

The main point of the Nero parallel, though, is an inversion of Nero's most famous (supposed) act, fiddling while Rome burnt. In the emperor, this was (supposedly - the evidence is not that great) an act of utter callousness and self-absorption, caring nothing at all for the fire destroying the city (which some authors imply he may have started) and more interested in his own composition of a song on the subject. This is the vital difference between him and the Romulan Nero, for this Nero cares. He viciously destroys an entire planet, and tries to destroy another, to avenge the perceived wrong to his own, but you certainly couldn't accuse him of not caring. Like (according to the somewhat gossipy sources) the emperor Nero, he burns worlds for his own purposes, but not out of callousness - rather, because he cares so much about his own home, he is driven to complete disregard for others. 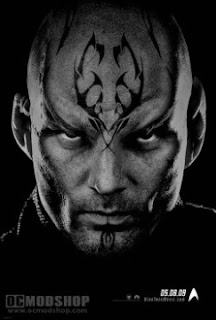 Rumours abound about who the villain will be in the next movie. I don't think I want Khan to show up - Montalban is such a perfect Khan, and The Wrath of Khan such a fantastic movie, I don't really feel the need to see a re-boot of that. I'd like to see some Klingons, if only to see which variety of make-up the film-makers decide to use, but of course, my no. 1 choice would be more Romulans, because then I could blog a review of it...