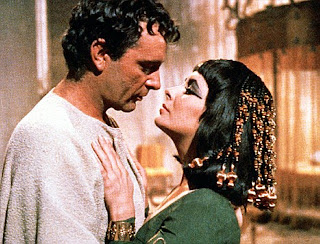 I decided a few weeks ago that I'd do a special post for Valentine's Day, on either Lasting Marriages or Doomed Romances, depending on my mood at the time. So, Doomed Romances it is!

5. Antony and Cleopatra, Cleopatra
Doomed from the start? Depends whether you think Antony ever stood a chance against Octavian - but probably. I'm not sure anyone really stood a chance against Octavian and Agrippa.
Do they set the screen on fire? They ought to, given Elizabeth Taylor and Richard Burton's famous love affair on set. As it happens, the affair between her and Rex Harrison's Caesar is rather better written and comes off better on screen, but Taylor and Burton give it good smoulder for all that.
Is it all set against the backdrop of a Worlde Gonne Madde? Yes, definitely. From the burning ships at Actium to the dead at Pharsalia to, most of all, Cleopatra's ludicrously over-done entrance into Rome, the world behind these two has definitely gonne madde.
Why this version? What with the sheer voyeuristic desire to watch Taylor and Burton fall for each other on screen, this version has to be the most tabloid-friendly of the many versions of this story.

4. Tiberius and Vipsania, I, Claudius
Doomed from the start? Between his ineffectiveness and his mother's ambition, yes, probably. You would have thought Agrippa's daughter would have been a good enough match, but you would have reckoned without Livia.
Do they set the screen on fire? Well, not really, no. And they only have one scene together. But they're very impassioned in that one scene.
Is it all set against a backdrop of a Worlde Gonne Madde? Um, no. It's set against the Pax Augusta, the most politically stable period Rome had experienced in a century.
Why this version? Well, Tiberius and Vipsania's marriage isn't one of the most commonly explored subjects in ancient history in popular culture. But mostly it's Tiberius' sheer impotence in the face of his mother, even when she makes him divorce the woman he loves, and his latent but ultimately powerful desire to be emperor, that makes their relationship here stand out.

3. Spartacus and his wife, Spartacus: Blood and Sand
Doomed from the start? Yes, we all know how the story of Spartacus ends.
Do they set the screen on fire? Their chemistry is fine - not amazing, but not disastrous either. And the graphic nature of the sex scenes in Spartacus: Blood and Tits means that most couplings (and triplings, and so on) set the screen on fire one way or another.
Is it set against a backdrop of a Worlde Gonne Madde? Most of the madess is yet to come, but their village burning is pretty dramatic.
Why this version? Most versions of the Spartacus story include his wife, one way or another, but Blood and Sand, with its longer running time, splits the character into two. In the current series, Spartacus: Vengeance, we see his relationship with a fellow slave from Batiatus' house, but this Spartacus is also a widower from his marriage to his wife in Thrace. From their first, ooey-gooey (in a romantic way, that is) sex scene, it's clear that she's utterly and completely doomed, and by the time she appears just in time to die in his arms, we're all quite relieved that development has been got out of the way. But it's an important relationship, and somehow, you feel it more in Blood and Sand's more prolonged and complex version.

2. Oedipus and his mother, Oedipus Rex (dir. Pier Paolo Pasolini, 1967)
Doomed from the start? She's his mother. So, yes.
Do they set the screen on fire? Um, OK, I confess, I haven't seen it. Yet.
Is it all set against a backdrop of a Worlde Gonne Madde? There's a plague, so yes, I should think so.
Why this version? Well, er, as I said, I haven't actually seen it. But there aren't that many representations of this story that follow it precisely, though there are some others that are set in the ancient world (as opposed to Pasolini's, set in the twentieth century). And there are other, metaphorical or science fictional, representations, like Code 46 (brilliant film). But Pasolini's is probably the best known adaptation of Sophocles' play. And the romance between a man and his own unknown mother has to make the list.

1. Antony and Atia, Rome
Doomed from the start? Perhaps. Antony is married to a succession of other people throughout (something the series plays down until he marries Atia's daughter Octavia) which can't be a good sign. But it's the double whammy of Caesar posthumously naming Octavian as his heir and Antony coming into increasing contact with Cleopatra that really dooms this love affair.
Do they set the screen on fire? Not always, but they definitely manage a few sparks over the course of season 2.
Is it all set against the backdrop of a Worlde Gonne Madde? Yes, given that this is set against the turbulent death of the Roman Republic. Since it's a TV series, though, epic battles and grand scenes are largely out, and the bulk of the madness lies in poor Atia's increasingly desperate attempts to get Antony's attention. 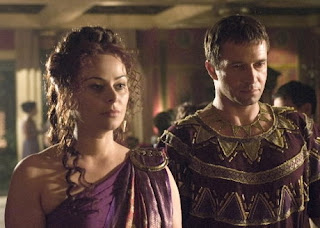 Why this version? Well, this story was invented for Rome, so of course this is the only version in which it appears. It's not exactly a necessary invention, but as we move into season 2, the tragedy of the faltering affair between Antony and the ought-to-be-dead-by-now Atia becomes one of the most heartfelt and human stories among all the political machinations and... whatever it is Boring and Dodgy are getting up to.

Honourable mention: Pyramus and Thisbe, a great story of doomed romance in ancient literature (chiefly Ovid's Metamorphoses), but usually seen in a comic context in popular culture, as a play performed by the Mechanicals in Shakespeare's A Midsummer Night's Dream.