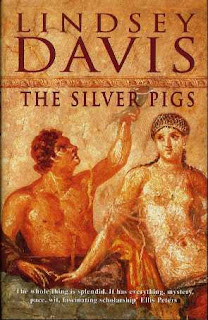 Lindsey Davis' Falco series is lighter than Steven Saylor's Gordianus in terms of both length and tone (earlier books are perhaps less light in tone than the later ones, but all are filled with a gloriously cynical strand of humour). Set during the reign of Vespasian, Falco works partly as a private informer and occasionally for the emperor, trying to save up enough money to move one more rung up the class ladder and marry his senatorial class girlfriend, Helena Justina. Davis takes us all over the Roman world, with regular checks in back at home in Rome, and we follow the trials and tribulations of Falco's lively extended family alongside his continuing attempts to make some money and stay alive.

Davis' historical novel about Vespasian's mistress, The Course of Honour, is also excellent and works well as a sort of semi-connected prequel to the Falco series.