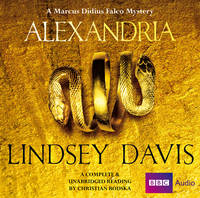 I enjoy Lindsey Davis' Falco books a lot though, as with everything, I have a tendency to read them in the wrong order. (During a recent conversation with Brother, we realised that Harry Potter is, in fact, the only series of books I've actually read in the correct order. He has persuaded me to read A Song of Ice and Fire in the correct order as well though). I've read several of the earlier books and just one of the later ones. I listened to this one in the car while commuting around the country, so I was able to get some work done, get through the book and brighten up the car journey all at once! The downside of this method is that there were times when my attention wandered due to concentrating on the road, but I think I followed most of it OK. Some spoilers follow.

The particular attraction of this one (i.e. the reason I picked it when shopping for audio books on Amazon) is that it's set in Alexandria, and that's always fun. The mixture of Greek, Roman and Egyptian culture in ancient Alexandria is as fascinating today as it was back then and the exotic setting provides a Falco with a fresh set of idiosyncrasies to make cynical and witty remarks about. Davis has always moved Falco around regularly and it keeps his stories engaging while allowing us a lengthy guided tour of the ancient world (though as far as I can tell she still hasn't had him visit Dalmatia - I'm going to campaign for the next Falco book to be set there!).

Another regular feature of the Falco books is a trope also often associated with fantasy - where you take something from the modern world and give it a fantastical/historical spin. How much I like this tends to depend on what the thing is and how well it works in the new setting (Terry Pratchett's use of British driving tests as assassins' final exams in Pyramids is the definitive, brilliant example). In this case, Davis has the perfect historical subject - a large research library, and its inhabitants. Her description of the researchers sitting with piles of scrolls stacked up to mark their spot is very funny, spot on as a description of a research library and works perfectly well in a Roman context.

Of course, where we have the library in Alexandria, we frequently have fire. This particular fire is clearly smaller than the one that destroyed most of the library, the exact time and cause of which is disputed anyway. It does create an exciting set-piece though. In my head, Helena riding in on a Roman fire engine to save the day looks a bit like Boudicca. Speaking of Helena, it's wonderful to see a happily married couple in a long-running series. So few authors are able to resist the urge to break up or kill off one half of their official couples, but sometimes you just want to read about people being happy for a change. Granted, for those of us who are single Falco and Helena might occasionally be a bit too happy, but overall this is a very good thing.

As usual, Davis' book is meticulously researched (to the point where occasionally it felt a teensy bit like I'd strayed into a first year class on the history of Alexandria!). When she includes a fabulously squirmy autopsy sequence (this book is not for the squeamish - and this was nothing compared to a later death by fire) she explains clearly what the ancient laws concerning autopsy - or 'necropsy' - were and why these characters might feel moved to break them. It all makes perfect sense and allows her to establish an important fact about the dead man without it feeling like she's broken out of her setting (I bet some Romans did perform autopsies. Like first century grave-robbers, or something). And it's a great scene (shudder)!

I listened to the unabridged audio book read by Christian Rodska, who is the perfect voice for Falco. He's got his gritty, world-weary but ultimately hopeful character down to a tee. He is also one of the few male readers I've listened to who is able to lighten his voice to play a female character without sounding squeaky or mildly ridiculous (though to be fair, most of the others were trying to do little girls, which is even harder). His Aulus perhaps isn't quite clipped enough, and some of the accent choices, while they helped to keep the characters apart, were a bit random (the Scottish vet/pathologist made a weird sort of sense, but Geordie took me right out of the setting) but on the whole, it's a brilliant reading and he really gets the character of Falco - especially important for a book narrated in the first person. 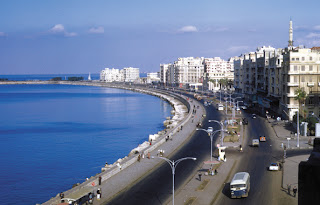 Overall, this is a colourful and fun addition to the Falco series, though possibly not one to read at mealtimes. I'm now trying to decide whether to get another audio book, or to try out the BBC radio dramatisations, which have the advantage of being slightly shorter, and I could go back to the beginning and remind myself where the series started!


Alexandria. Another place to which, so far, I have not been!
Books Falco Roman history