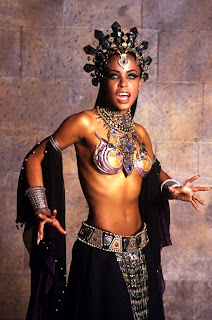 You all knew this was going to be my Halloween post this year, didn't you?!

('Ancient' means Roman or earlier - another couple of hundred years and Eric Northman would be top of the list, easily!)

5. Queen Akasha, Queen of the Damned
What breed of vampire? Anne Rice
How ancient? Unspecified - very. An ancient Queen of Egypt, and her husband has the name of an ancient Near Eastern god.
How modern? Not even a little bit. Akasha makes no attempt whatsoever to assimilate into the modern world, she just swoops in, kills everyone in sight, then foolishly defers to her new husband because she's such an old-fashioned gal at heart.
How awesome? Anne Rice's vampire mythology is pleasantly heavy on ancient vampires, including several Romans, and the whole crux of her vampires' existence revolves around Akasha and Enkil, the oldest vampires. Marius is pretty interesting, especially in his relationship with Lestat, and Pandora has her moments, and normally both of them would come out ahead of a statue that occasionally moves its arm. But the number five spot goes to Akasha on this list for one reason - the fabulous scene in Queen of the Damned in which, stirred to full consciousness by the thrill of rock music, Aaliyah slinks through a vampire bar, writhing to the music, before immolating every vampire in it for threatening her beloved Lestat. It's totally awesome.

4. The Volturi, New Moon
What breed of vampire? Twilight
How ancient? Unspecified, but Caius and Marcus at least have got to be Roman
How modern? Not very - they seem to have got stuck somewhere around the Renaissance. Perhaps, being Italian, they were so proud of Italian achievement during that period they decided to just stop there.
How awesome? Yes, I've read all the Twilight novels (except Breaking Dawn). And seen all the films. You may judge me now. And I'll be the first to admit, there's not much that could really be described as 'awesome' about any of them. But there's a reason Michael Sheen keeps being hired to chew up the entire set and spit it out all over everyone else's plainer acting in various films (see also Tron: Legacy and Midnight in Paris). His performance as Aro, the leader of the Volturi, who I presume is Roman since his brothers are called Caius and Marcus, is just a brilliant, cheesy, absurd, daft pleasure, perfect for a silly story about a whiny teenage girl and her sparkly vampire boyfriend.

3. Godric, True Blood
What breed of vampire? True Blood (TV series)
How ancient? About two thousand years. The show hasn't gone into his origins in much detail, but his Roman tattoos are clearly visible and he mentions that he was alive at the time of the crucifixion (but 'missed it'. After all, if every vampire who said he was at the crucifixion was actually there, it would have been like Woodstock).
How modern? He's got hold of a vaguely modern outfit, which is a good start. Godric can function fine in the modern world, but has reached the point where he doesn't actually want to.
How awesome? Godric somehow takes the overdone vampire tropes of being tired of immortality, guilt-ridden over his past misdeeds and generally having gone soft, and makes them awesome. While Bill mopes away in traditional Louis/Angel/Edward Cullen-style, feeling the pain of prolonged life and bloodlust, Godric has taken two millennia to reach this point, and he decides to do something about it. His suicide is both tragic and weirdly uplifting and his dialogue with Sookie immediately preceding it is beautiful. Book!Godric, while sharing many of the same qualities, is a paedophile, which makes him less sympathetic even as he puts an end to his existence, but TV!Godric, without that detail and with Allan Hyde's wonderful, quietly strong performance, is made of awesome.

2. Kakistos, Buffy the Vampire Slayer, 'Faith, Hope and Trick'
What breed of vampire? Buffyverse
How ancient? Very. His name is Greek, so I'm assuming he's from ancient Greece, though he may already have been very old when he was named.
How modern? Not overly well assimilated, but he does hang out with Mr Trick, who's very modern.
How awesome? He's not, really, but the reasons he's so high on this list are twofold. One, I like that it takes a massive wooden pole through the heart to kill him. So often, very ancient vampires are abruptly offed by our heroes and you wonder how on earth they managed to survive for so long if they can be killed that easily. An especially big stake may not be the most inventive solution to this problem, but at least they thought about it. And Two, I like Buffy's mishearing of his name (Greek for 'worst of the worst') as 'kissing toast', especially her belief that a minion vampire had told her he lived for kissing toast.

1. Appius Livius, Dead in the Family
What breed of vampire? True Blood (book series, so technically the Southern Vampire Mysteries)
How ancient? Roman.
How modern? Not very. Appius' way of life hasn't changed all that much in the last two thousand years, though presumably he has updated his outfit.
How awesome? Appius is unpleasant and terrifying, but the totally awesome thing about him is that he's unpleasant and terrifying in a Roman way. He lives according to an ancient moral code and expects everyone around him to behave that way too. Best of all, not only does he insist on his names being used correctly, Harris even includes a guide to how to pronounce them correctly! Appius isn't interested in rock music, bars, random annoying mortal girls or suicide (and he has a weird post-mortem sort of vengeance on the mortal who particularly annoys him and nearly kills him, revealed in the following book). Of all the vampires on this list, Appius LiWIus is the only one who really feels like someone from another time and place, and more specifically, like a Roman. 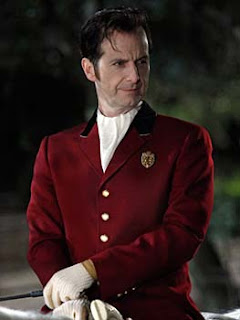 Honourable mention: Russell Edgington, True Blood (TV version). At 3,000 years old, he's obviously some variety of 'ancient', but had to be left off the list largely because three vampires from the same series was a bit much. He is totally awesome in every way though.
Films Sci-Fi and Fantasy TV Vampires