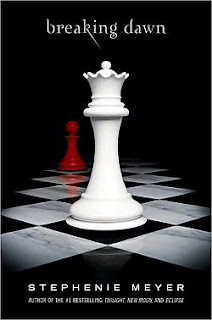 Yes, I have read all the Twilight books. I know exactly what you think of me now. But they're escapist, silly fun, and Stephanie Meyer sure knows how to write a page-turner.

I particularly liked the first one, which was a nice, daft sparkly-vampire story, and the second, because when Bella's hanging out with Jacob they actually feel like they might be real people who enjoy each other's company. (I much prefer Jacob to Edward, but that's at least partly because my brother is a tall, relatively pale-skinned, dark-haired musician called Edward). The second novel is also where the Volturi first appear - ancient Italian vampires called Caius, Marcus and Aro - i.e., surely, Romans! I read the book a while ago so my memory of it is a bit dim. However, over December I finally got around to reading Breaking Dawn, in which they also feature, having seen Part 1 in the cinema, which wasn't bad at all. I'd been putting it off for ages because, while Books 1 and 2 have their fair share of weird and off-putting stuff (WATCHING YOU SLEEP IS STALKING, NOT LOVE) Books 3 and 4 really take the crazy factor up to eleven.

I don't even know where to start on the madness that is the world of Twilight, so I'm just going to direct you to Cleolinda Jones' Twilight reviews, recaps, discussion etc, particularly her Horrify the Twilight Noob game. Suffice it to say that the first half of Breaking Dawn works rather well as a metaphor for the horrors of pregnancy (which is much, much nastier than any pop culture interpretation would have the inexperienced believe - see, for example, this description of all the things no one tells you about pregnancy, not even pregnant women. I should add that I have no personal experience of this issue, but I have seen the statistics for the mortality rate among pregnant women, women in labour and infants in pre-industrial societies. It's not good). The second half, however, gets progressively madder and madder, the worst crimes against narrative and characterisation being Bella as the Best Vampire Eva! (worse than the worst Mary-Sue-style fan-fiction), the ridiculous anti-climax of the final showdown (in real life, I am all for diplomacy and ending things without violence wherever possible, but in vampire fiction, not so much) and worst of all, Jacob imprinting on the baby. See Cleolinda's summaries for more detail - I can't bear to think about it!

Anyway, the ultimately disappointing finale heavily features the Volturi again. We get a few details about their history, mentioned briefly while discussing their various strengths and weaknesses. Since Meyer is not known for her rigourous research any implications may be pure coincidence, but what the heck, let's look over it anyway. It is suggested that the Volturi have been around for about twenty-five hundred years, which would make them early Republican Romans. However, it was only fifteen hundred years ago that they came to power, following the fall of the Romanians (who appear to have essentially turned into Enkil and Akasha from the Anne Rice-verse). I found this quite interesting because this would mean they came to power just as the Roman Empire was crumbling. I rather like the idea that they had to hide and live fairly quietly while the human Empire was strong, but were able to come out and take over the vampire world once the human Empire had crumbled. That would actually be a rather interesting story. I have no idea, though, whether Meyer actually intended to suggest that interpretation, or whether she just picked dates at random.

The influx of new vampire characters in the final third of the book also includes the 'Amazons' - three female vampires (two of whom appear to be in the only non-hetero-normative relationship in the entire quartet) who come from South America. What Meyer has done here is basically a sophisticated pun, but it's a rather nice one. These three come from the area of the river Amazon, right? And they're tough female warriors (who appear to shun the sexual company of men) so they're also Amazons, geddit? Tee-hee. (Either that, or Meyer has made the same mistake I used to make as a child, and Terry Pratchett's Eric makes, and actually thinks the Amazons come from the Amazon). I rather liked them. 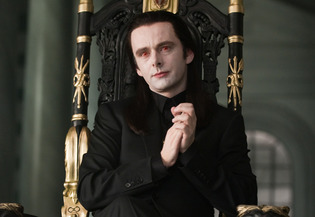 Of the three Roman vampires, my favourite by far is the perpetually-bored Marcus, who hardly does anything but imply that the world in general is uninteresting and beneath him. He's supposed to be about twenty-five hundred years old as well, but in my head, he's a bit younger than that - I like to think he's Mark Antony (preferably as played by James Purefoy) and in between falling on his sword and actual death, he got vamped, and has wandered the world, shagging, fighting and trying to conquer Parthia ever since. He's now had enough of the whole thing, hence the boredom. I'd read that novel. Anyway, Aro and Caius aren't nearly as interesting, but in the movies, Aro is played with camp glee by Micheal Sheen, so I'm rather looking forward to Breaking Dawn Part 2, as his presence should vastly improve the whole sequence. You never know, the filmmakers might even include an actual fight at some point.
Books Mythology Romans Sci-Fi and Fantasy Vampires