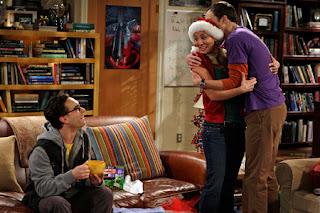 It's a Saturnalia miracle!

OK, so Christmas Day has been and gone and December's over, but we're still well within the Twelve Days of Christmas, so we're still within the season and there's room for one more seasonal post. Saturnalia was the Roman mid-winter festival, and if you want to know more about it, Caroline Lawrence has written about some of the customs Saturnalia and Christmas have in common here. I've posted on depictions of the Roman Saturnalia before, from Steven Saylor, the Roman Mysteries and Chelmsford 123. However, what I want to talk about today is the way in which popular culture set in later periods describes Saturnalia.

How many of our Christmas customs come directly from the Saturnalia and how many are simply coincidentally similar is hard to say. The use of lights to decorate the house at the darkest time of year is, perhaps, obvious and doesn't need a specific explanation, and festivals of light are celebrated at the darkest time of year all over the world. The overall mood of celebration (often fueled by alcoholic beverages) and the inverting of social traditions or breaking down of social boundaries that, as seen in the holding of the Servants' Ball in the Downton Abbey Christmas special, continued well into the twentieth century, may or may not have survived from Roman times (during Saturnalia, masters would wait on their slaves). One thing we are fairly sure of, though, is that the Christian festival of Christmas was deliberately timed to be the Christian Saturnalia.

What mildly irritates me about popular culture references to the festival, though, is the insistence that early Christians somehow 'stole' Saturnalia from the pagans, and the underlying suggestion that this knowledge somehow devalues Christmas as a Christian celebration. The Horrible Histories special, Horrible Christmas, for example, claims that 'the Christians pinched [the sun's birthday]... to celebrate the birth of Jesus, even though that wasn't his birthday'. (I feel the need to point out here that we have no idea when Jesus' birthday was - if the shepherds were out all night with the sheep that suggests lambing season, but that's only in one gospel and really, it doesn't matter). Meanwhile, The Big Bang Theory's season 2 Christmas special, 'The Bath Gift Item Hypothesis' (the one where Penny gives Sheldon the napkin from Leonard Nimoy) includes the following dialogue:


Penny: Hey Sheldon, are you and Leonard putting up a Christmas tress?
Sheldon Cooper: No, because we don't celebrate the ancient pagan festival of Saturnalia.
Penny: Saturnalia?
Howard Wolowitz: Gather round, kids, it's time for Sheldon's beloved Christmas special.
Sheldon Cooper: In the pre-Christian era, as the winter solstice approached and the plants died, pagans brought evergreen boughs into their homes as an act of sympathetic magic, intended to guard the life essences of the plants until spring. This custom was later appropriated by Northern Europeans and eventually it becomes the so-called Christmas tree.
Howard Wolowitz: And that, Charlie Brown, is what boredom is all about. (Thanks to imdb)

It's more the traditions of bringing in mistletoe and Yule logs that come from Saturnalia greenery than the Christmas tree, but what Sheldon's saying is basically factually accurate. It's the interpretation that mildly irritates me. Granted, both these examples are intended to be humourous and are exaggerating to make it sound funnier, but this still reflects a common notion that Christians have 'stolen' Christmas from Saturnalia, or that Christmas is 'really' Saturnalia.

The Christians did 'steal' Saturnalia in one sense, in that if you are a Christian, you can't worship any other gods, so Christians would not just celebrate Jesus' birthday, they would refuse to celebrate Saturnalia (unlike members of the cult of Mithras, whose birthday was also supposed to be 25th December, but who could have continued to worship Saturn, Jupiter et al alongside Mithras). However, the deliberate decision to celebrate the birthday of Jesus on 25th December and adopt elements of the Saturnalia does not make it 'stolen'.

This is because the celebration of religious ritual does not necessarily have to be intimately connected with belief. In the ancient world, religion as a whole was much less concerned with belief and dogma than Christianity, as can be seen from the way stories about the gods were re-told and rewritten. Christianity, as a religion, is more concerned with dogma and faith, but the purpose of various rituals remains a linked but ultimately separate issue. Plenty of people get married in Christian churches without having a strong Christian faith, and some might have their children Christened (though perhaps less often in recent years) because those things are social rituals that mark a changing point in your life. Others get married in a registry office, but the wedding is no less a wedding because it's not religious, and many of the same traditions are performed.

Annual festivals are not dissimilar - that's why Christmas is still such a big deal in an increasingly secular society. We need a mid-winter festival to brighten things up at the darkest time of year and we need a social gathering to reconnect with family. The ritual exists, in a way, independently of belief in whatever god it's dedicated to.

Of course, belief is not totally disconnected from the ritual - I go to church on Christmas every year because I believe in Jesus and I choose to celebrate that. But whether or not Jesus was actually born on 25 December is totally irrelevant to the choice to celebrate on that date, and more importantly, the Christians did not 'steal' Saturnalia from poor, hard-done-by pagans. The Roman world simply reached a point where more people were Christian than not, so instead of celebrating Saturn, the festival switched to celebrating Jesus. The Christian leaders who made the decision to celebrate Jesus' birthday at that time were maintaining the festival because it was important to people, but it's not a theft so much as an evolution (or devolution I suppose, depending on your point of view).

Pop culture references to Saturnalia usually show some awareness of these issues, particularly the well-known anthropological need for a mid-winter festival. Some go further. Terry Pratchett's Hogfather goes some way to probing the issue of the winter festival, but gets caught up in the business of belief, which is a red herring. There is belief, philosophy, faith etc, and there is ritual. Sometimes they're connected, but sometimes they're only loosely connected or even not at all. Community's season 2 Christmas special, 'Abed's Uncontrollable Christmas' probably comes closest when it concludes that the meaning of Christmas is the idea that Christmas has meaning. However, the annoying notion persists that Christians 'stole' a pagan festival, or that Christians have somehow been tricked into celebrating a pagan festival, neither or which really reflects the subtle process of transformation that turned Saturnalia into Christmas. 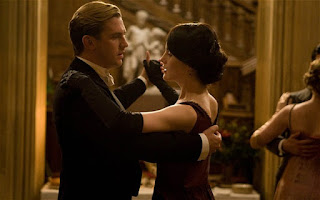 Scene from the Saturnalia-esque Servants' Ball in Downton Abbey (of two 'upstairs' people dancing, but still). Which is totally relevant and not at all an excuse to post a picture of Dan Stevens. Obviously. Ahem.
Ancient religion Books Horrible Histories TV