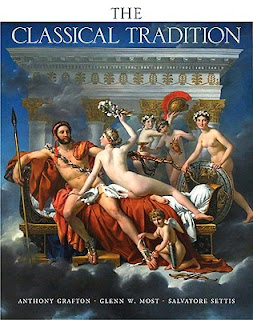 I'm making another of my occasional forays into non-fiction, because this enormous and beautifully illustrated book covers just about every area of culture influence by the classical world, including popular culture. This was a review copy from the distributor Inbooks, on behalf of the publisher Harvard University Press, organised for me by Hasan Niyazi over at Three Pipe Problem, who has reviewed it from an art historian's perspective here.

This is a quite spectacularly huge book, and its massive size and scope is both its greatest asset and its biggest flaw. On the positive side, the sheer volume of information here is staggering. The book is organised alphabetically, so you can think up just about any topic concerning the Classical Tradition and find out something interesting about it. The entries themselves also cover a wealth of topics, including some welcome material on the manuscript tradition of some ancient texts, which is always useful and not always included.

On the downside, a certain amount of detail is necessarily lost in the course of including so much. Non-specialists are not given all that much guidance on issues such as which centuries, specifically, are meant by 'the Roman period' or 'the period of imperial Rome', on the line between myth and history (the phrase 'Olympias, a descendant of Achilles through Neoptolemus' gives no indication that Olympias is historical and the other two are mythical) or on the specifics of certain subjects (the entires on 'Ajax' and 'Augustine' do not make it clear that there are two Ajaxes - the entry focuses on Telamonian Ajax - and two Augustines - here only Augustine of Hippo, the author of City of God is acknowledged, though perhaps the Augustine who was thought of as the founder of the English church is of less interest to non-Brits).

I also found myself slightly surprised at some of the topics included. 'The Classical Tradition' is here interpreted in the widest possible sense and goes far beyond the basic topics of the influence of Classical art, architecture and literature on later art, architecture and literature. Entries on things like 'aesthetics', 'grammar' and especially 'medicine' are, essentially, short introductions to entire areas of history and literature that would normally warrent books on their own, while other entries read like etymological essays on the Greek and Latin origins of English words or even punctuation (e.g. 'asterisk'). The good thing about this is that it acts as a forceful reminder of just how much Western culture owes to the Classical world. However, it does make the volume a little unfocussed, and I think if I wanted to learn about the influence of Classical medical theory on later physicians, I'd pick up a book on the history of medicine rather than the 'Classical tradition' (probably one written by the renowned scholar Vivian Nutton, who was on the editorial board for this book).

Among the more successful entries are those on specific characters, whether mythical or historical. Entries on mythical characters tend to pick out the most well known Classical text to feature them and then launch straight into their reception, though this includes their ancient reception as well as modern - so, for example, Achilles is known from the earliest text we have, the Iliad, so several of his later Classical appearances are included as 'reception' of the Homeric Achilles, whereas the entry on Oedipus starts with Sophocles and provides no information on any other Classical sources for Oedipus apart from Seneca. In such a large work with such a broad range this is understandable as the focus is, after all, reception and tradition, not the history of myth - though a little more detail, particularly on such a fascinating character as Oedipus, might have been nice. The entries on historical characters provide a great introduction to each, again focussing on their reception and including ancient reception - so, the entry on Julius Caesar starts with Augustan propaganda and Lucan's Civil War before going on to Napoleon and Marx. Some of these entries include popular culture, for example the entry on Odysseus mentions Ulysses (if that can be called popular culture!), Troy and O Brother, Where Art Thou?, but others do not. I was particularly surprised to find no popular culture references at all in the entry on Caesar and only very brief references to some of the major films on Cleopatra in her entry. Whether or not popular culture is included seems to depend on the individual author, rather than on an editorial decision. 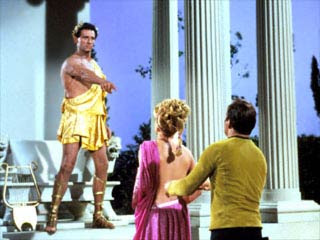 Specific information on popular culture is gathered under the headings 'Cinema', 'Novel' and 'Television'. The entry on 'Cinema' is excellent, covering most of the important bases, though unavoidably hampered by the fact the book was published in 2010, so the relatively large number of Classical films from that year can't be included. (The suggestion that the original Star Wars trilogy 'dramatizes the end of antiquity' is an interesting one, and I may have further Thoughts on that later). The 'Television' entry, though short, is equally good, including a brief reference to Star Trek's 'Who Mourns for Adonais?', though the book seems to have been finished too early to be aware of Spartacus: Blood and Sand.

The section on the 'Novel' is more frustrating. The entry is divided more or less evenly between the history of the novel as a form with some limited roots in Apuleius, Petronius and Lucian and an alternative to epic poetry, and a discussion of novels with Classical subject matter. However, this second section is interested solely in the 'literary' novel. I, Claudius, The Ides of March and the works of Mary Renault are referred to but, we are told, the literary historical novel 'no longer flourishes in England' (sic. - Ulysses doesn't get a mention either, as it happens) or America. The article is so desperate to fill the gap, it starts talking about cinema and film again, namely Troy, Alexander and Rome. Not only does the article completely ignore the many, many historical novels it does not consider to be 'literary' that have been published since the 1950s and were not written by Mary Renault, which would be far too numerous to be named individually, it also ignores the entire genre of historical detective fiction or mysteries, which has given us Falco, Gordianus and The Roman Mysteries, among others. This is such a popular genre and has produced such wonderful books, to ignore its very existence seems bizarre. 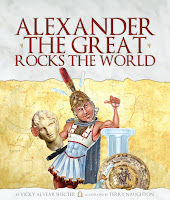 This volume is beautifully presented and clearly laid out. There are some linguistic oddities; Alexander the Great 'found himself' king of the world - I would argue he made himself king of the world - and I, Claudius has been 'marketed widely on tape and disk' - i.e. it's been released internationally on video and DVD. I'm also not sure the List of Articles is really necessary in an alphabetically-arranged book. However, these are minor details, and, as a resource, this is reasonably easy to read and use.


Front cover of Vicky Alvear Shecter's 2006 book on Alexander
This book offers an extraordinarily wide-ranging reference book on all aspects of the Classical Tradition, and will be especially useful for anyone looking for an encylopedia-style source of information about any aspect of the subject. Like any encyclopedia, analysis is brief where it is included, and those interested in a particular area will need to follow this up with works more specific to what they're doing, but as an introduction and guide, you won't find a more ambitious project than this.
Books Classics and Classicists