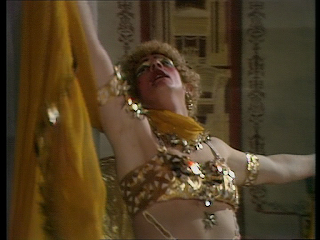 We've seen many different versions of several historical 'mad' emperors over the years; these are a few of my favourites.

5. Bill Wallis as Hadrian in Chelmsford 123, 'Arriverderci Roma!'
How mad? He's married to a horse, his ex-wife is a goat and he's having an affair with a sheep.
Really mad? Not unless you count a well-known fondness for Greek culture, which extended to him growing a beard, which was fashionable among educated Greek men, but not Romans. But since Greece was one of the greatest civilizations of the ancient world, this seems not unreasonable. In fact, Hadrian has one of the better reputations of all the emperors. This generic nutcase is technically Hadrian solely because the show is set in AD 123.
What's to like, then? The expression on his face when he approaches the sheep with an admonishment to his slave not to breathe a word to Portia (the horse) is priceless.

4. Kenneth Williams as Julius Caesar in Carry on Cleo
How mad? He came, he saw, he conked out. He's not really mad as such, but he doesn't seem entirely sane either, and tends to put his trust in the wrong places.
Really mad? Depends what you count as madness. Declaring yourself dictator for life and then wandering around without a bodyguard might be considered mad, in a certain light.
What's to like, then? Do we need to quote it again? They've all got it in for me! Williams is just the perfect antidote to many a straight-laced, sombre Caesar.

3. Joaquin Phoenix as Commodus in Gladiator
How mad? He kills his father and he's in love  - or lust - with his sister (which was Not OK, even for a Roman). He takes on one of the best gladiators in Rome, which, even if you've already mortally wounded said gladiator, isn't a great idea. He also has a very amusing way of saying the word 'vexed'.
Really mad? According to Cassius Dio, he was more stupid and cruel than actually mad. He 'was guilty of many unseemly deeds, and killed a great many people' (including the real Lucilla).
What's to like, then? Phoenix is absolutely brilliant in this role. You almost feel sorry for Commodus as you watch him desperately try to win his father's approval, but by the end, with his utterly chilling instructions to Lucilla concerning their future relationship (luckily cut off by Maximus' victory in the arena) you're glad to see his blood spilled all over his nice white armour.

2. Simon Woods as Octavian in Rome
How mad? This entry is for Woods specifically, because although Pirkis' Octavian does take part in that whole unfortunate incest episode, it's in Woods' older Octavian that the cracks really start to show. Even leaving aside his rather dubious sexual tastes - to each his own, and Livia seems quite happy with it - this is a man who is slowly but surely taking over the world, killing a large number of people in the process. He's a psychopath, basically.
Really mad? Augustus has an excellent reputation as an emperor, because he ensured during his lifetime that he would leave an excellent reputation behind him. He was obviously hyper intelligent, and not mad in the traditional let's-marry-a-horse kind of way, but personally, I lean towards the opinion that he was pretty psychotic. 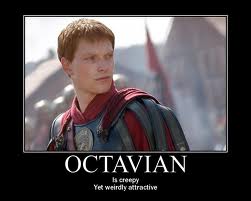 What's to like, then? The man took over the world. Literally. I think this internet 'poster' sums it up quite nicely.

1. John Hurt as Caligula in I, Claudius
How mad? Where to start? Has affairs with all three of his sisters, eats his own foetus, declares war on Neptune, turns the Imperial Palace into a brothel, invites his favourite horse to his uncle's wedding and then there's the gold bikini...
Really mad? Oh yes. Quite doolally.
What's to like, then? John Hurt's Caligula just had to be at the top of this list - quite possibly the best mad imperial performance on screen. Everything about Hurt's Caligula is ridiculous and fantastic, but I suppose it's the gold bikini - and accompanying dance sequence - that clinches the win.