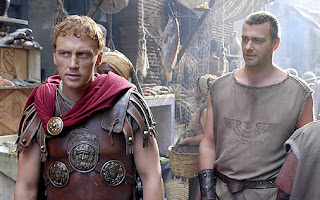 As a researcher and teacher of gender studies, I'm not wild about the concept of 'bromance' - why should deep male friendship and stories about it have its own word, but there's no equivalent for women? Whether it's because it's assumed women form close relationships anyway and such a thing is less remarkable, or whether it's because people are less interested in stories about deep female friendship (particularly when it's two people and not a group), it's sexist however you look at it. However, I am a big fan of Scrubs, which may not have invented the term but is clearly built on bromance and I think may have helped to popularise it, so what the heck. Whatever I think about it, I suspect the term is here to stay. So here is my totally subjective list of the best bromances in Classical pop culture.

5. Mark Antony and Julius Caesar (Rome)
Real bromance? Yep. As far as we an tell, anyway. Except for the part where Caesar made Octavian his heir and really pissed Antony off, but that was posthumous.
Does my heart feel warmed? Sort of - it's more tragic than heartwarming when Antony discovers Caesar's body. And in the Rome version, which is the one I've chosen to highlight here since it's the one that gives the most screentime to the partnership (and it's the one where Mark Antony is played by James Purefoy, not that I'm shallow or anything), Antony looks more scared for his own skin that grief-stricken for his friend. But still, there's genuinely touching emotion there, especially in Marlon Brando's performance as Antony.

4. Claudius and Postumus (I, Claudius)
Real bromance? Goodness knows - probably not, since Claudius was quiet and stuttered and Postumus was exiled for general bad behaviour, but there's no evidence to prove otherwise.
Does my heart feel warmed? Again, this is more tragic than anything else. Like his uncle Tiberius before him, Claudius has few friends, and the ones he has get killed off, one by one. Fortunately, unlike Tiberius, Claudius does not respond with sexual violence, perversity and misanthropy.

3. Spartacus and Crixus (Spartacus: Blood and Sand)
Real bromance? Well, Crixus was one of Spartacus' generals, so yes, quite possibly.
Does my heart feel warmed? This one is still in development - they've been more like frenemies, or just enemies, for much of season 1 - but my heart feels warmed when Spartacus gets chucked in the medical centre with Crixus, who asks drily 'Have you been making friends again?' Perhaps my heart is weird.

2. Marcus Aquila and Esca, The Eagle
Real bromance? Definitely not. Fiction bordering on fantasy. Not that a Roman and a Briton couldn't be friends - I'm sure they could, and quite a few intermarried - but the film is pure fantasy.
Does my heart feel warmed? The film is kind of daft, and you feel like half of the scenes showing the development of their relationship have been cut, but still - I defy anyone to watch the two limp out together at the end and not feel a little glowy in the chest region.

1. Lucius Vorenus and Titus Pullo, Rome
Real bromance? The two are named in a short section of Caesar's Gallic Wars and described as great friends, so technically, yes. However, this section is tiny and the only thing we get from it is that they both fought in the Gallic Wars - and since our Vorenus and Pullo (see, I do actually know their real names!) only meet after these wars are over, they really have nothing in common except the name. It's neat thing to do, using these two names, but these characters themselves are entirely fictitious.
Does my heart feel warmed? It varies depending what they're doing, but they definitely have their moments - the best of which is, of course, the moment where Vorenus leaps into the middle of a gladiatorial combat yelling 'Thirteen!' to save Pullo from execution. 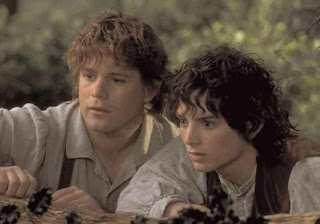 Honourable mention: Frodo and Sam, The Lord of the Rings. The Lord of the Rings is mostly based on Norse mythology, but it has it's Classical elements. These days, Frodo and Sam's relationship is often interpreted as homoerotic rather than bromantic, which is a fair enough interpretation (and there are certainly plenty of moments in both book and film to support that interpretation), but I've always seen this as a bromance myself (and since Tolkien was a Victorian devout Catholic, that's probably closer to what he meant).